Last night’s musings on why I love New York City:

Because Thursday is the new Friday.

Because I could rush-hour train out of my midtown Manhattan office & be at my evening’s destination in 30 minutes, & was offered a seat on the subway (Did I look old? Pregnant? About to pass out from the work-day fatigue? Who cares? It was appreciated!) 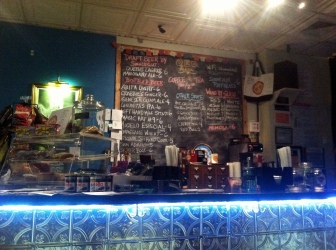 opened up QED, a space in my ‘hood of Astoria, Queens, where the community can gather to chat, drink, laugh & learn. It’s the best “living room/kitchen/salon” around, especially when one’s rent-stabilized apartment is a bit too small for comfort.

Because now, in addition to the great beverage selection, there’s healthy food on the menu/being offered.

Because she’s letting Greater Astoria Historical Society (where I’m on the board) present at QED monthly, & last night we got to experience Forgotten New York‘s Kevin Walsh & “Forgotten Queens.”

Because Forgotten NY was in the house: saw this presentation last month at historic Neir’s Tavern in Woodside, Queens, attended the Guides Association of NYC 1st Annual Gala/Awards earlier this month with Kevin, & then participated in the “Panorama Challenge” at Queens Museum at his prompting.

Because after the history presentation, I stayed for the comedy show, & caught funny lady Jenny Rubin in the act, again as well (just last Thursday, attended her hilarious comedy show at 2A in the East Village), & at the intermission between shows, we geeked out on her ‘hood of Washington Heights’ historic areas to explore & photograph: Church of the Intercession, Audubon Terrace, Trinity Cemetery, United Palace Theatre (a Lowe’s Wonder Theater)…

Because in this big city, small town encounters occur every day. You can fly solo, but you’re never alone: there’s always someone interesting/creative around if you choose to interact.

Because I could walk home afterwards in the chilly air, but warmed by the wine, & make it to my apartment in just 20 or so minutes.

Because it was the last day of Winter (despite today’s snow forecast)!